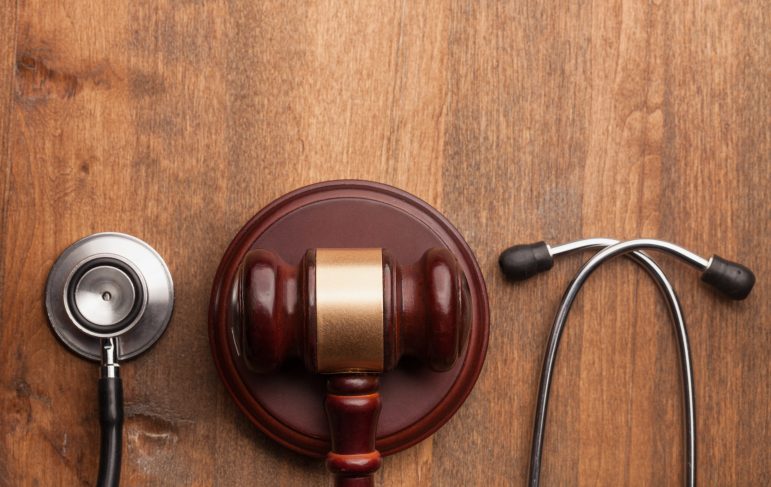 This information explains many of your rights if you are injured by medical malpractice and is not a substitute for good personal legal advice from an attorney with knowledge and experience in the area of medical malpractice law. It is important to keep in mind that laws and procedures change frequently and are subject to differing interpretations. Consequently, it is best to consult with an attorney if you want legal advice. Should you decide to hire a lawyer, remember that the hiring of a lawyer is an important decision that should not be based solely upon advertisements. Also, remember that this information is based upon Florida law and should not be used outside the State of Florida.

What Is Medical Malpractice?

In legal terms, medical malpractice occurs when “a health care provider deviates from the acceptable standard of care in the treatment of a patient, and the deviation causes an injury to the patient that the patient would not have suffered except for the deviation.” This sounds rather complicated but it is really rather simple when we look at each part of the definition separately.

Most health care providers are protected by Florida’s Medical Malpractice Act which requires a complicated and costly investigation of your claim. An attorney can help you decide whether or not you need to comply with Florida’s complex presuit statutes. If you fail to comply with the presuit laws, your claim may be barred, forever preventing you from making any recovery for your injuries.

The second part of the definition of medical malpractice requires that the health care provider “deviate” from the acceptable standard of care. This means that the doctor must have done, or failed to have done something, that other doctors in a similar circumstance would or would not have done.

What is the Acceptable Standard of Care?

The acceptable standard of care is the level or amount of care that citizens of a community would agree is adequate medical care. This is based on the level of care that other doctors in the same community provide to their patients. For example, if we are determining what the standard of care is for our family doctor, usually a general practitioner, we would look at what other general practitioners in the same area do and use this as a guide for measuring whether or not our doctor provided acceptable care. It is important to remember that the standard of care is different for each type of health care provider. For instance, when we consider a “specialist” such as a surgeon, the standard of care for him would be much higher in the area of surgery than it would be for a medical doctor who does not specialize in surgery.

The bottom line is this: What would a similar reasonable doctor have done? Did the doctor do what other reasonable doctors would have done in the same circumstances? Did the doctor act unreasonably when rendering treatment? An attorney, with the help and guidance of experts, can decide whether or not it is reasonable to believe that the doctor’s care fell below the acceptable standard and caused serious injury. Attorneys make these decisions after consulting with medical specialists to determine whether or not the doctor was at fault and caused a serious injury.

It Takes More Than A Breach Of Reasonable Care – “Causation”

If a doctor has deviated and fallen below the acceptable standard of care in treating his patient, this does not necessarily mean there are grounds for a medical malpractice claim. In order to have medical malpractice, the third part of the definition requires that there must be an injury caused by the breach of care. For example, if a doctor fails to diagnose a broken finger but it heals without any disability, then his failure to diagnose the break did not cause further injury. If, on the other hand, the broken finger heals incorrectly causing deformity and disability, then the doctor’s failure to diagnose the fracture has caused further injury. If the additional injury could have been prevented had the doctor made a proper, timely diagnosis, there is clearly a case for medical malpractice against the doctor.

The Doctor’s And The Insurance Company’s Excuse

In the situation described above, the insurance company for the doctor would probably take the position that if there was damage to the finger, it was caused by the original injury and not by the doctor’s failure to diagnose and treat the problem in a timely manner. This is a doctor’s favorite excuse: “My mistake did not cause your injury!” Usually, a health care provider who has injured a patient will claim that he or she did not deviate from the acceptable standard of care. He or she will also claim that any possible deviation did not cause injury to the patient, or if it did cause injury, then it was not his or her fault because someone else in the hospital, such as a nurse or another doctor caused the injury. He or she might even claim that the patient was at fault for the bad result or that the patient would have suffered from the injury even without the malpractice. Therefore, it is extremely important to remember that if a doctor and/or his insurance company can persuade a jury to believe that any one of their excuses is valid, then the injured victim will lose the case. Consequently, it is extremely important that a victim of medical malpractice be represented by a competent, experienced trial lawyer.

Under Florida law, if a person causes an injury, they are also legally responsible for any malpractice that occurs in the treatment of that injury. For example, if someone has a terrible injury from an automobile crash caused by a negligent driver, then the bad driver is not allowed to argue that the car crash victim’s injuries came from medical malpractice that occurred following the crash. If the law was otherwise, every defendant (in a car crash etc.) would claim medical malpractice in order to avoid full responsibility for the victim’s injuries. This in turn, would create numerous medical malpractice lawsuits brought by car insurance companies against the doctors that have treated car crash victims.

If you believe that you or a loved one has been the victim of medical malpractice, you can receive a competent legal opinion concerning your rights, your duties, and your responsibilities and it is absolutely free. Take the time to learn your rights before you lose them. Call Art Liebling.