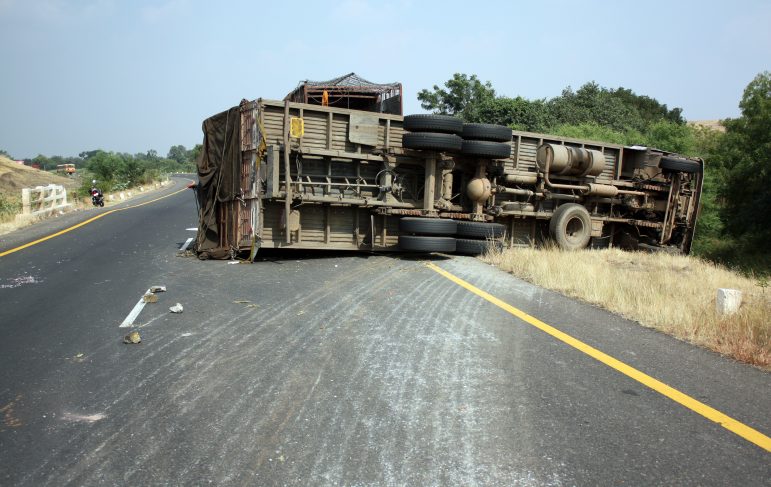 1 out of every 8 people killed in a traffic accident in the United States is killed in an accident involving a tractor trailer/semi-truck. Every year, 500,000 large trucks, or “semis,” are involved in accidents on our roads. Of these, 5,000 involve fatalities and over 94,000 crashes result in injuries.

There are several reasons why semi-truck accidents are so dangerous: size, speed and driver fatigue. A fully loaded, semi-truck is a huge piece of machinery. When you put something like that on the road at speeds topping 60 miles an hour you get a monster that can run over anything in its path. Tractor trailer / truck drivers are under constant pressure to move cargo and then, add the growing problem of truck driver fatigue. Often semi-truck drivers have 16-hour days which are not uncommon.

If you are involved in a crash with a semi-truck, it is important to seek the advice of an experienced injury attorney. Since the size and weight of large trucks cause significantly more devastating damages than an ordinary car, it is crucial that the victims seek sound legal advice. There are special laws that govern the operation of large trucks. For instance, semi-trucks have limitations on the weight of their loads, on which roads they can travel and on the amount of time the driver may spend on the road. Even if the crash was partially your fault, you may still make a significant recovery for your damages. That is why it is so important to consult with an experienced injury attorney who knows the laws governing heavy trucks.

Approximately one out of every four semi-trucks, upon inspection, have been found to be so mechanically deficient, that it is illegal for them to be operating on the roadways, and they are declared out of service. These chilling statistics of injuries, deaths and illegally operating and unsafe semi-trucks are simply unacceptable. Changes must be made in the trucking industry to protect our friends, our families, and the American motoring public.

Nearly 110,000 men, women and children are killed or injured each year on our highways in crashes with big trucks.

It is important to understand that a Trucking case is not like a car crash case. There are hundreds of issues in a trucking case that are not even considerations with a typical car accident.

Hours of Operation and Driver Fatigue are the number one cause of trucking crashes. It is estimated that forty percent of big rig trucking crashes are at least partially attributable to driver fatigue. The Department of Transportation states that fatigue is a direct cause of 15 percent of truck accident fatalities and injuries, resulting in more than 750 deaths and nearly 20,000 injuries each year.  As a driver crosses the 10 hour line, his chances of causing a serious crash increase dramatically.

Today, the way the driving rules are set up, a driver can operate 77 hours in a seven day week. This is a dangerous situation motivated by profits being placed over safety.

What is being delivered on our highways is danger, not goods.

The reason that we have fatigued drivers on the road is because a trucking company, and even the driver, only make money when the trucks are moving. Any down time, rest time, repair time and any break time is a loss of revenue, and thus profits and income for the driver and his company.

There are thousands of trucks on the road this week in violation of the Federal Motor Carrier Safety Administration. There are tons of examples where trucking companies, drivers, and insurance companies will try to alter or destroy evidence adverse to their interests.

Many drivers carry logbooks that are false. Two sets of logbooks, one that the actual time is recorded, and the other commonly called the “joke book” or “comic book” which are created to destroy the trail of evidence which will lead back to driving time violations.

To be licensed to operate these heavy trucks on our highways, truck drivers are required to meet certain medical requirements, have current medical evaluations to assure that the driver is fit to be driving a heavy rig. Many times, these documents are not contained in the personnel file held by the employer. The trucking companies have a shortage of qualified drivers, and will occasionally allow an unfit driver to head out on the highways.

The good news is that there are lots of inexpensive safety devices available to the trucking industry to help prevent fatigued driving. However, the trucking companies often choose not to purchase them because safety is not their highest priority, profits are. For example, in Europe, trucks have been fitted with computers that record the hours of operation based upon when the truck is moving. This form of electronic driver logbook is much more reliable than the hand written books that are used by the majority of truck drivers in America.

Many big rigs carry computers that records data such as speed, brakes, g-forces and other important information about the trucks operation prior to a crash. This information is often downloaded by the trucking company who hired the driver, or by the insurance company that insures the truck. Most drivers are instructed that after a big crash, to call their employer, so that they can rush a team of investigators to the scene before even the police arrive. They investigate the crash not to determine fault, but to avoid fault and responsibility. Often times this critical computer information is not preserved, or is lost, or was found to be non-recoverable by the investigator who is asked to turn over the data to the lawyer who brings suit on behalf of the injured or killed victims.

A truck weighing 120,000 pounds needs fifty percent more space and time to stop than a truck weighing the legal 80,000 pounds. Transportation experts estimate as many as thirty percent of all commercial trucks on the road today exceed federal weight limits. Heavy trucks need more time to stop, and are at a greater risk of rolling over. Also, their increased weight causes even more damage when they are in a crash.

Every motor carrier, its officers, agents, representatives, and employees responsible for the management, maintenance, operation, or driving of commercial motor vehicles, or the hiring, supervising, training, assigning, or dispatching of drivers, shall be instructed in and comply with the rules in this part.

FACT: The semi-truck’s insurance company has a team of in-house investigation and accident reconstruction experts that work around the clock. They will usually arrive at the scene sometimes before the police and almost always before the wrecker has even cleared the roadway. Their goal: to find some evidence to protect their money, and deny paying you what is owed.

FACT: Semi-trucks are regulated by the Federal Motor Carriers Safety Administration which contains areas of overlap between state and federal laws, thus making it easy for the insurance company to deny your claim on a technicality that you do not even know about.

FACT: Most semi-truck drivers have their entire livelihood at stake and from their point of view, accepting liability will likely mean the end of their career. There are countless stories where the semi-truck driver has allegedly lied to save his job thereby giving the insurance adjuster the ammunition he needs to deny the victim’s claim.

FACT: Within 24 hours the semi-truck’s insurance company has already began a full investigation, assigned the claim to one of the most aggressive adjusters in the industry, dispatched a team of defense attorneys, and is preparing a file on you.

FACT: semi-truck insurance companies have teams of defense attorneys on standby that are dispatched immediately after a crash, with the sole purpose of building a case against you.

FACT: Insurance adjusters assigned to semi-truck crashes who defend commercial insurance policies are the most aggressive adjusters with the most experience, chosen for their ability to efficiently reduce and deny claims like yours.

The biggest mistake that most people make is to treat a trucking crash the same way as a car accident. They are not even close. The complexities of a trucking crash are many. The investigation within the first few days are critical to protect the key evidence to win your case.

In a perfect world, the truck driver would admit his fault and you would be paid for your losses. Unfortunately, the world is far from perfect and the truth is that good people, like you, often pay for the greed of the transportation companies.

With such a difficult task of proving the trucker’s negligence, and the proof required to fully demonstrate your damages, you cannot afford to try and take on a team of professional investigators, the truck driver, an aggressive and experienced adjuster, AND a team of defense attorneys without having an experienced team to protect your rights. Call our office today, and find out how we can protect your rights.